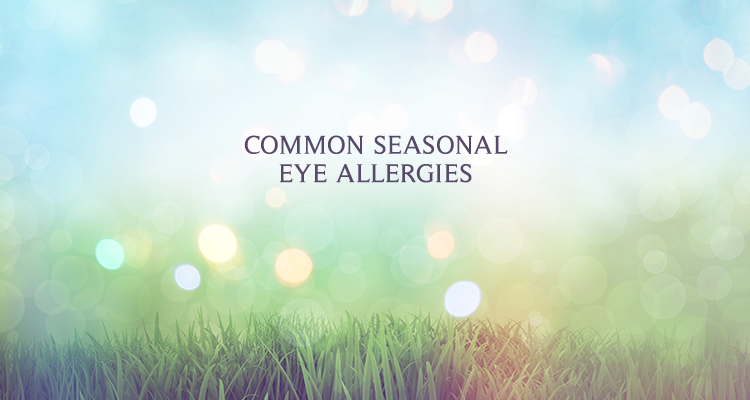 Spring is in the air – this means warmer weather and more time outdoors! What a wonderful time of year – trees get leaves almost overnight and there are spring blossoms everywhere you look. For most people, this is the time of year that they enjoy the most. Unfortunately for allergy prone individuals it is a terrible time… In this month’s newsletter we are going to have a look at common seasonal eye allergies and how we can treat it.

The change of the seasons

The change of seasons can be particularly trying. Published in a Health24 article, the Allergy Society of South Africa estimates that up to 20% of South Africans suffer from allergic reactions. This includes sneezing, wheezing and itchy eyes. The culprit? Pollen. Trees, grass and weeds produce it in abundance in order to survive. For many South Africans this might spell hay fever (seasonal allergic rhinitis), asthma and eczema.

It’s the more mundane-looking bushes – the ones that have to rely on the wind to carry pollen – which you should worry about.

There’s another snag: male plants are the ones that produce pollen to fertilise the fruit of female plants yet municipalities tend to plant male trees in an effort to reduce the mess made by fruit.

How to minimise the effects of pollen

Avoidance where possible is the most effective treatment strategy for pollen allergy, according to allergy expert Dr Harris Steinman. He advises:

Allergens: who are the main culprits?

Trees. Watch out for foreign trees that produce large amounts of windborne pollen – our indigenous trees produce insect-borne pollens that are, on the whole, too sticky and heavy to be carried far by the wind.

Cypress trees. Native to South-Eastern Europe, found mostly in the coastal areas of the Western and Eastern Cape and are often grown as ornamental garden trees. They have male flowers and female ligneous cones. The cypress produces large amounts of pollen from July to October.

Oak trees. Not indigenous to South Africa and were brought here in the 17th century from Europe. They’re found mostly in the Western Cape and flower in spring or early summer. Oak pollen can be problematic to allergy sufferers.

Plane trees (London planes). Found in most urban areas of South Africa. These foreign deciduous trees produce large amounts of buoyant pollen. The flowering season is in October and November.

The foreign eucalyptus. An evergreen found mainly in Gauteng but also scattered throughout South Africa. It has a tendency to flower all year, especially in warmer areas. In the Western Cape its flowering season is restricted mostly to August to November.

Many Acacia trees are indigenous to South Africa – the best known being the thorn trees that grow on the savannah. Many of these trees bloom in late spring and early summer. The pollen of some can be allergenic.

The Port Jackson Willow. Imported from Australia and is considered an alien invader in the Western Cape. The tree’s bright yellow flowers are especially striking in spring when the pollen can cause allergies.

The huge Yellowwood tree must be one of the most stately and decorative of our indigenous trees. It is a tall, straight-stemmed, evergreen forest tree with dense, glossy foliage. It occurs mainly in the Western Cape. Its flowering season is from October to December.

Grass. Grass pollens are by far the most abundant of the pollens and a great problem for allergy sufferers in South Africa. Pollen levels peak here in summer but – unlike elsewhere in the world – grass pollens are present almost all year, especially in some parts of the country. Grass pollen is easily inhaled because it is so small, which is a nightmare for asthma sufferers.

Bermuda grass. One of most allergenic grasses – a creeping, low-growing green-grey grass which spreads rapidly. It’s found throughout South Africa and flowers from September to May.

Johnson grass. Native to the Mediterranean – found in the dry regions of South Africa. It’s extremely allergenic and flowers from December to January.

Rooigras (red grass). Grows in all areas of South Africa except the Western and Northern Cape. It’s commonly eaten by grazing animals that prefer tall grasses. It grows up to 1.5 metres tall and flowers from June to November.

Love grass. Also known as sand love grass – a clumping grass with medium- green foliage, which grows 30-60 cm tall and is found in all areas of South Africa. It has a lengthy flowering season from August to February.

Thatching grass. Found mainly in the north and the east of South Africa. It’s often the dominant grass in areas where there is an annual rainfall of more than 600 mm. It has a long pollen season from September to February.

Kikuyu. A fine-leafed creeping grass that forms a dense turf and is used for lawns in many urban areas. It has a particularly long flowering season of six months, lasting from September to February.

Rye grass. Found in the southern, eastern and northern parts of South Africa. It’s often blended in lawn seed mixtures and has a pollen season from September to November.

Other trees that may cause allergic reactions include the olive, willow, poplar, cottonwood, jacaranda and the indigenous stinkwood. Birch trees are highly allergenic.

Other grasses common to South Africa which may result in hay fever are wild oats, reed, cocksfoot, nut grass (sedges), velvet, rescue, Bahia and Kentucky blue grass. Driving through farmlands where cereals such as oats, wheat and maize (forms of grass) are grown may cause allergic reactions.

What are the symptoms of eye allergies (allergic conjunctivitis)?

Red, itchy, watery, and burning eyes are common symptoms of allergic conjunctivitis. You may also wake up in the morning with puffy eyes.

Children often present with an increased blinking response and most often the parents or teachers send them for an eye examination as it may seem that they struggle to see properly. Upon examining them they suffer from allergic conjunctivitis.

Acute allergic conjunctivitis. This is a short-term condition that is more common during allergy season. Your eyelids suddenly swell, itch, and burn. You may also have a watery nose.

How is allergic conjunctivitis diagnosed?

At De Jongh Optometry we will examine your eyes and review your allergy history. Redness in the white of the eye and small bumps inside your eyelids are visible signs of conjunctivitis.

At De Jongh Optometry we strive to make sure that allergies are diagnosed correctly and treated accordingly. Allergies can have a severe effect, if not treated, on your quality of vision and overall comfort. Make your appointment at De Jongh Optometry today – our friendly and professional team will ensure that your eyes are very well cared for!

We use cookies on our website to give you the most relevant experience by remembering your preferences and repeat visits. By clicking “Accept All”, you consent to the use of ALL the cookies. However, you may visit "Cookie Settings" to provide a controlled consent.
Cookie SettingsAccept All
Manage consent

This website uses cookies to improve your experience while you navigate through the website. Out of these, the cookies that are categorized as necessary are stored on your browser as they are essential for the working of basic functionalities of the website. We also use third-party cookies that help us analyze and understand how you use this website. These cookies will be stored in your browser only with your consent. You also have the option to opt-out of these cookies. But opting out of some of these cookies may affect your browsing experience.
Necessary Always Enabled
Necessary cookies are absolutely essential for the website to function properly. These cookies ensure basic functionalities and security features of the website, anonymously.
Functional
Functional cookies help to perform certain functionalities like sharing the content of the website on social media platforms, collect feedbacks, and other third-party features.
Performance
Performance cookies are used to understand and analyze the key performance indexes of the website which helps in delivering a better user experience for the visitors.
Analytics
Analytical cookies are used to understand how visitors interact with the website. These cookies help provide information on metrics the number of visitors, bounce rate, traffic source, etc.
Advertisement
Advertisement cookies are used to provide visitors with relevant ads and marketing campaigns. These cookies track visitors across websites and collect information to provide customized ads.
Others
Other uncategorized cookies are those that are being analyzed and have not been classified into a category as yet.
SAVE & ACCEPT